Another combo post, this time about another potential serial story. (I have so many ideas for serial stories…)

I’ve been working on The Woodsman since…January? Maybe longer? I don’t remember when I first started writing it.

Anyway, I’ll be introducing the protagonist and titular character today, along with a snippet of the first chapter.

Amber Collins is the protagonist, and like TJOPL, this story is told from her POV. She was born on October 8, 1967, and is 27 years old. She’s a single mother of a four-year-old girl, and is in the process of becoming an ASL teacher.

During summer break of 1994, she and her daughter, Charlotte, go to a little isolated town called Marigold Hills.

There, she discovers an unsolved arson, and despite trying to convince herself it’s summer break, she ends up getting herself entangled in it.

The Woodsman is the titular character, and may not have any sections told from his POV. He’s a loner who prefers to be in the woods away from civilization because…reasons. (He is biding his time though…)

His face lit up with recognition. “Oh yeah, I live there!” he said. “My name’s Gene. Sorry for scaring you, ma’am. So, you’re looking for Marigold Hills?”

Amber nodded. “It’s not that far from here, is it?”

“Nope. Just keep going straight for about…” He scrunched his nose in concentration. “Five miles? Eight? I’m not that great with distance.”

“But it’s not far. Thank you so much,” Amber said. “I was beginning to think my daughter and I would have to spend the night in the car.”

“Yeah…you really don’t want to do that around here,” Gene said, sticking his hands in his pockets. He grinned mischievously. “Especially with the Woodsman lurking about.”

“The Woodsman. No need to worry though, he’s not real. He’s just a legend.”

“What is he supposed to look like?” Amber asked, her curiosity peaked.

“Like he came straight out of World War II. Well, kind of. He’s supposedly wearing modern clothing, but the one thing that’s definitely from the war is the gas mask.”

Gene nodded. Amber blinked. Out of all the local legends she had heard of surrounding small towns, someone wandering around in a gas mask was something new.

As of right now, I’m still not sure whether this will be a serial story or not. And speaking of serial stories, I’m afraid I’ll have to postpone The Journals of Pamela Logan…again. 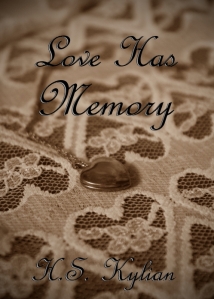